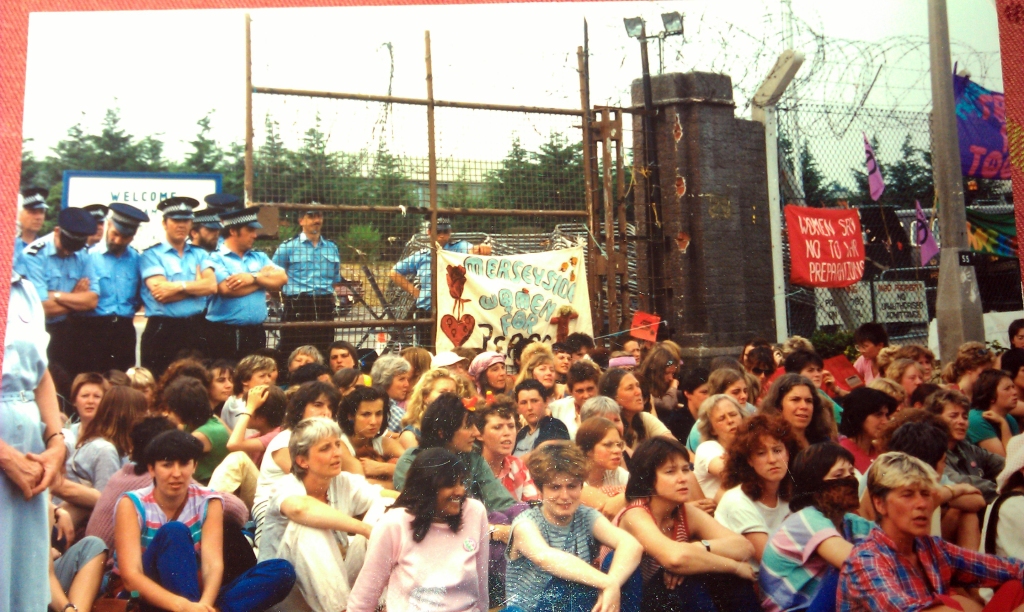 Below is an extract from my first piece for Lacuna, a new human rights magazine. The article is part of Lacuna’s first edition on Protest, which examines (through a series of narrative articles, reviews, interviews and fiction) the different ways people resist and respond to injustice. I wrote about the women who took part in the iconic Greenham Common peace protest in Britain during the 1980s. What drove that protest, who were the women involved, why just women, and what happened next? It was a fascinating piece to research. Dozens of interviews and hours spent scouring archives later, you can read my final piece here: http://www.lacuna.org.uk/thinking/memories-of-a-protest/  Meanwhile, this extract describes one moment of direct action, indicating that the Greenham Common peace camp was more than a static protest. It was  a carefully planned movement reliant on the bravery and unwavering conviction of the women taking part. Comments welcome.

The women wait, blinded by the inky blackness of night. The countryside is still and the winding roads open and empty. Hidden in the dark, women are everywhere, some lying shivering in ditches; thick coats soaked with rainwater, rough and cold against their skin, bodies doused in essential oils to ward off military dog handlers, feet sore from hours of walking to find a good position. They are armed with thin, plastic bags of wet clumps of pink dough, which they call ‘gloop’.

Jean Kaye, or ‘Pankhurst’as she is known on these nights, also waits, alert in her small car. She spots the thunderous parade of military vehicles and whispers into a transistor radio: ‘Pankhurst calling, Pankhurst calling…’Jean starts her car and follows the convoy as it roars through the countryside, shattering the silence.

A shock of flashing blue lights cuts through the darkness as a dozen police vans hurtle along the lanes. These are followed by military support vehicles, and after that US humvees with large machine guns on top. Then come the Cruise missile launchers; the vast cylinder of metal atop a line of thick wheels seems to stretch on forever. Standing on the hill near one of the gates at Greenham Common, one can see the convoy slice its way through the countryside for miles; Jean’s car and the cars of other watchers ant-like, trailing behind.

Then angry screams and chants. At various points on the roads between Greenham Common and Salisbury Plain, where the US army practise firing nuclear weapons at Russia, peace women rise from the darkness unfurling banners and gunging the convoy with gloop.

“I [would] …go into the road with a banner, when it was safe. Most of the time you had to scurry like mad to get out of the way. But sometimes they would stop, and the feeling of empathy you had with the driver and with the earth that you were standing on was really lovely,” says Juliet McBride, gazing out at the Berkshire countryside on a bright day thirty years later. She cocks her blonde head, smiles wickedly and the nostalgia dissipates: “Then you’d climb on top and wait till you got thrown off. Or arrested.”

The women crawl onto the monstrous vehicles, clasping cold metal as military guards reach to pull them away. One woman manages to stick an anti-nuclear poster on the tiny windscreen of a humvee, and another stands on the roof of a van; a slight figure with a crop of brown hair, blue eyes gleaming, legs parted as for thirty seconds she revels in her power, the American government’s nuclear weapons programme at her feet.

From about 1983, when Cruise missiles first arrived at Greenham Common, to the late eighties, the United States Air Force took out a convoy of Cruise missiles roughly once a month from the military base to a secret location in the English countryside to practise its preparations for a nuclear attack on Russia.

“It was supposed to melt into the countryside, but because of monitoring of Cruise Watch and Greenham Women it never did,” says Margaret Downs, a peace activist living in Oxford.

Cruise Watch tracked the movements of convoys across Britain and monitored the government’s development of nuclear bombs. In time, the women at Greenham became adept at spotting the signs of an impending convoy outing. It could be the increased presence of security police around the base or the American officer’s wife living nearby in Newbury who always washed her husband’s smartest uniform and hung it outside to dry a few days before nuclear firing practice. Once the women were certain, they would spread the news to various peace groups across the country. Jean was on a telephone tree of watchers who, at short notice would jump in their cars to spend the night monitoring movements of the convoy and calling ahead to alert peace activists hidden in ditches and verges ready to spring out and protest.

Hazel’s friend Jenny was also part of Cruise Watch and spent many hours chasing convoys with Jean. “Every single time, every single exercise was witnessed by people,” she says. “We would take the women down to Salisbury Plain so they could camp nearby. Sometimes they would camp for a night or a day. They would go and interfere with what was going on. Jean would do a lot of the ferrying women backwards and forwards, often at night. We ended up sleeping in shifts at times.”

Another Cruise watcher Maureen Wilsker lived a few streets from Jean in Witney at the time.

“The message would come through, usually about 11pm that it [the convoy] has moved …Jean would ring me. When I drew out of my house in Bridge Street and drove up to Jean –it doesn’t sound real –but a little police car would pull out from Oscilly’s garage and follow me up to Jean.” Her expression is incredulous. “Jean and I would laugh. It followed us as far as the Newbury roundabout and then another one took over.”

Mahalla Mason was also part of the radical circle living in conservative Witney in the 1980s. “Jean was quite serious about it. We all had these names. Coriander. Only the peace movement would have these names,” she says smiling. “It was very amateur and sneered at. They sneer because you threw paint at it…[but] the theory was if paint can hit it, something much worse can hit it.”

So what did the women achieve by throwing fuschia flour bombs and paint at nuclear convoys?

“It made an absolute nonsense of the whole thing of secrecy and being hidden,” says Nuala. The key aims were to bear witness, make known their opposition, and hinder the convoy’s procession. Slow it down, get in front of vehicles, and if they dared, get on top. Anything, to say, you are not going to rehearse nuclear war smoothly.

“They never got one out secretly, everyone was protested or witnessed. They realized there was nothing they could do to make these things secret,” says one Cruise watcher and Greenham woman.

After a convoy protest, Jean would drive around the Berkshire countryside collecting tired, hungry women. If they managed to interrupt the convoy, lighting fires in the road or climbing up trucks, the women were often arrested, but never charged. Sometimes they were held for hours and then deposited somewhere random, miles from Greenham or a railway station.

One Greenham woman, who wishes to remain anonymous, remembers being put into a deep, dark pit with a group of other women and left for hours. Soldiers silently paraded around the top, guns strapped across their chests, impervious to the women crying out to be released. “It was dark, you couldn’t see out. It was muddy at the bottom.”

Even for the Greenham women, so used to clashes with the police or challenging the military might of the US armed only with gloop and banners, it was a terrifying experience. Desperate to get out, the women attempted to provoke the officers guarding them, in the hope that they would be charged with assault, arrested and taken out of the pit. It failed. A decade later the Ministry of Defence paid the women £10,000 in damages for wrongful arrest and imprisonment.